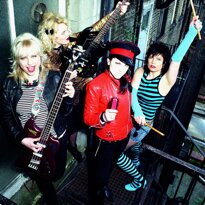 would have been the appropriate house band of «The Rocky Horror Picture Show». The four hair miracles dressed in cat suits turn their live gigs into costume parties and should – in a perfect world – perform in the next double feature by Quentin Tarantino and Roberto Rodriguez.

a song that reminds you of school
DeLillos - Neste Sommer

G: A song by a Norwegian band about the last day of your summer holiday. It’s that desperate feeling of not wanting to go back.

H: Really fancied her with a lazer beam accross her head on the album cover. She’s also officially Norway’s friend.

K: Because we were doing the things they sung about.

best concert you ever attended
Zombina & The Skeletons

H: Zombina & The Skeletons at Dirty Water or the Priscs supporting the Cramps at Astoria.

G: At Forum, London. Mainly because I was at the front and Lux held my hand (and licked it) all the way through «I Wanna Get In Your Pants». It was quite confusing for a wee girl!!

K: At the Hope and Anchor. He blew the roof, the floor, and the walls off. Then punched all the spotlights out.

your boozed up anthem
Kiss - Rock And Roll All Nite

G: It’s the one song that you can guarantee everyone screams to if it happens to come on, and everyone knows most of the lyrics to but would never admit to it when sober.

The Cure - The Drowning Man

a record you fell in love to

K: The Nuggets Garage Punk compilation. I fell in love with Garage Punk when I first heard this and the relationship is still burning strong.

H: One of these guys that broke my heart.

Corona - The Rhythm of the Night

G: Okay, I was young, on holiday in Spain and hanging out by the bumper cars. This song was on constantly and the boys were oh so cute!

G: It was on a 60s compilation that was constantly on in my parents car. It has a hilarious finger pops in the mouth sound on it.

Brotherhood Of Man - Save All Your Kisses For Me

K: I knew it was sinister and creepy, even though I was tiny.

H: I dropped it on the floor, it cracked and broke, obviously. Then I blamed my brother for having broken it, so I had a reason to get angry.

H: My dad always played it in our car, which at the time was a beetle.

H: A great orchestra of drums playing a march for 10 minutes.

G: It was the summer I was taken under the wing by a friend’s older brother who fed me Rockabilly, Garage Punk and American punk & hardcore. It was like hearing the dark gospel for the first time.

Enslaved - Below The Light

H: It was definitely not in the summer of 69, with my first real six string. Had a splendid time on the top of a mountain all summer, and Enslaved was constantly in the record player. Beautiful album!

G: A love song about a Real Man letting his woman go without pleading and crying even if his heart just plopped on the floor. And it's just under two minutes!

H: Just a really good song! Love her voice and the words.

The Beach Boys - God Only Knows

K: Because when you listen to this you know Brian’s been heartbroken too.

G: I sing it everytime I cross the bridge or pass the station.

Lord Kitchener - London Is The Place For Me

K: Joyful calypso about an experience that for Jamaican immigrants was probably anything but joyful. Heartbreaking.

The Priscillas - All The Way To Holloway

Human Beinz - Nobody But Me

H: The Priscillas’ new album that will be out soon!

G: A brilliantly surreal and hilarious Norwegian children's record about cows with plats and wonky udders.

G: I have my own theme song that plays every time I enter a room.

H: All songs in the world I guess.

G: From my all time favourity cartoon. Italian strangeness, surrealism and very bright colours at its best.

G: I have a Chansons Francaise compilation that I listen to on lazy mornings.

K: Even though every time I listen to it I wish I lived in California in 1966.

The Who - My Generation

H: The structure is just genious, and you instantly want to sing along. Oh, cheese!

The Turtles - Happy Together

K: A summer of sun and love distilled into three perfect minutes.

If you were stranded on a deserted island you would...
take these three books along:

take these three CDs/records with you:
David Bowie - Pin Ups

Broken Social Scene - You Forgot It In People

take these three DVDs along:

K: «Oh Brother, Where Art Thou?» by the Coen Brothers / «Pi» by Darren Aronofsky / «West Side Story» by Jerome Robbins

take these three games along:

start to learn these three things:

H: speak Italian / how to build a boat / Scuba Diving

miss these three things the most about living in a city:

H: ability to see bands every day / be anonymous / have the endless amount of options to do whatever you like any time

invite these three persons for a weekend:

get these three pets: